What is often referred to as the marriage contract is not of the same nature as a business contract that can be dissolved by mutual agreement or by the decision of a court. The essence of marriage is an exchange of vows between a man and a woman. A vow is a solemn promise, a solemn commitment, made before God. In the case of marriage the commitment is to remain together ‘till “death do us part.” In other words, it is a commitment on the part of the spouses to remain married t
374 views1 comment

Over 16,000 Urge Archbishop of Dublin to Disinvite Fr. James Martin from World Meeting of Families

To its “LGB” acronym the homosexual movement added the “T” for “transsexual” or “transgender” in a kind of “common front” of all anomalies in sexual behaviour. Unsurprisingly, the acronym keeps increasing. For example “LGBTTQQIAAP” (Transsexual, Queer, Questioning, Intersex, Asexual, Ally, Pansexual). The inclusion of so-called “transsexualism” or “transgenderism” in the homosexual campaign shows the ideological aspect played by this anomaly in the current Culture War which i
1,097 views0 comments

Because of Its Grave Errors Amoris Laetitia Should Be Rejected

“Thou shalt not commit adultery.” (Exod. 20:14) “Everyone who divorces his wife and marries another commits adultery, and the one who marries a woman divorced from her husband commits adultery.” (Luke 16:18) Since the family is the basic cell of society, when it is in crisis, all of society is dragged down with it. Today, the family is shaken above all by the crumbling certainty in marriage’s indissolubility, and the role this indissolubility plays in family life and in the e
59 views0 comments 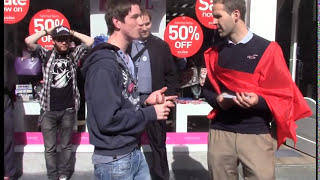 This is a video which documents the reporting bias of the Irish Times on the Marriage Debate. #Activities #Marriage
17 views0 comments

Crisis of the Family: The Synod and Europe

The Sacrament of Marriage is under vicious attack here in Ireland. We are organising two talks dealing with the Crisis of the Family in Europe and at the Synod. Please try to make it for this presentation on such a crucial subject. In Cork on Tuesday evening – SMA Hall, Wilton, Cork City, 7.30 pm Room 6 In Dublin on Wednesday evening – Buswells Hotel, Molesworth St. Dublin 2, 7.30 pm The Boardroom #Marriage #Conference
12 views0 comments

10 Reasons Why Homosexual “Marriage” is Harmful and Must be Opposed

1. It Is Not Marriage Calling something marriage does not make it marriage. Marriage has always been a covenant between a man and a woman which is by its nature ordered toward the procreation and education of children and the unity and wellbeing of the spouses. The promoters of same-sex “marriage” propose something entirely different. They propose the union between two men or two women. This denies the self-evident biological, physiological, and psychological differences betw
22 views0 comments

Marriage: Can and should it be re-defined?

There are many reasons why we should defend traditional marriage. The most important of these reasons is that it conforms to the natural law and, above all, to the moral law, and therefore it is the will of God. However, it should be clear that, as far as the debate on same-sex marriage goes, the use of the word “marriage” should always be understood in reference to the recognition and support marriage is given by the State, and the reasons for this recognition and support. T
24 views0 comments

10 Reasons to Defend the Traditional Family

In light of the attacks on the Traditional Family in Ireland and the rest of the World, we would like to share with you a new video that our sister organisation in the United States has just launched. It lists ten reasons why marriage can only be between one man and one woman. Please watch and share with your friends so that these important reasons can be known. Also regarding the defence of marriage and the family is our Filial Appeal to His Holiness Pope Francis. It is a si
37 views0 comments

In view of the Synod on the family to be held in October 2015 in Rome, a group of concerned lay Catholic leaders and pro-family organisations, including Irish Society for Christian Civilisation, gathered to address a filial appeal to Pope Francis asking him to reaffirm categorically the Catholic teaching that divorced and civilly remarried Catholics cannot receive Holy Communion and that homosexual unions are contrary to Divine and natural law. We note with anguish how the ch
15 views0 comments