Two rosary rallies took place, one on the Hill of Slane and the other in Trim, Co. Meath. The Hill of Slane was chosen because it is a symbol of Ireland’s conversion and the spot where Christianity took its first triumphant step towards converting Ireland.

The second place was the opposite however – the Puca procession in Trim, a launching pad for neopaganism and the de-christianisation of Ireland, which the Christian soul must oppose with all his strength.

The Hill of Slane

As a bonfire is lit by a match, so Ireland was enlightened by St. Patrick’s faith and confidence, demonstrated by him lighting the Paschal fire on the Hill of Slane. That act was the symbolic beginning of St. Patrick’s mission. It was also a deliberate breaking with pagan tradition, which stated that all fires in surrounded areas should be lit from druids’ fires. For this disobedience the king’s soldiers arrested St. Patrick and brought him to King Laoghaire, who in fact converted (as some sources say) and allowed St. Patrick to continue his work. Almighty God makes the impossible possible if humans are make that first small step.

Rory O’Hanlon, a member of ISFCC led the Rosary Rally on the Hill of Slane. Over forty people, including one priest, who led the last rosary himself, attended the rally.

A participant of the Rosary Rally in Trim observed the impact the Puca procession had as it passed the audience. “People were quite indifferent to us before procession, but after procession passed by people started insulting us, no doubt encouraged by these evil spirits of Puca Festival.” That evening, the twenty-five members and friends of ISFCC represented all the Christian virtues on which Christian Civilisation is founded: faith, bravery, beauty, chastity and unity in Christ.

Why Catholics Should Oppose the Puca Festival

Just as St. Patrick opposed the pagan druid rituals, Catholics should also oppose the pagan Puca Festival. This is a quote from the Puca Festival’s official website: “Roaming the darkness like a shadowy spectre, the shape-shifting spirit of Puca comes alive!” Here is a clear invocation to a pagan goddess but as we know, “… all the gods of the Gentiles are devils”. (Psalm 95:5)

Their website also says “When light turns to dark and the veil between the worlds of the living and the dead thins, the creatures of Samhain, Ireland’s ancient Halloween tradition, come to life.” Chronologically, Samhain predates the celebration of All Saints Eve, or Halloween. Samhain cannot therefore be “Ireland’s ancient Halloween tradition”. It was Pope Gregory I, to encourage the proper veneration of the dead, who decreed the celebration of All Saints or All Hallows. The day before All Saints naturally became All Hallows Eve or Halloween.

Halloween and Samhain are also the opposite. Samhain celebrated the dead and evil. Pagans believed that they must dress up as a hellish monsters, so that the forces of dead and evil creatures wouldn’t find them. Christians however should not be afraid of evil. Through the sacrament of Baptism we became God’s children to whom He said: “…behold, I am with you always, until the end of the ages…” (Matt. 28:20). By participating in activities such as the Puca Festival, a Catholic disrespects his baptismal oaths, turns away from God and voluntarily rejects protection against darkness and the demons.

There is nothing more effective than a prayer from sincere and devoted people. Twenty-five Catholics prayed the rosary on the streets of Trim during the festival keeping Christ’s promise in mind: “Do not be afraid any longer, little flock, for your Father is pleased to give you the kingdom” (Lk. 12:32) and joy and confidence filled their hearts whenever they looked at statue of Our Lady.

Hear us, O, Heavenly Queen and let us be your heel to crash the devil’s head!

What Happens at a Fatima Visit?

What Happens at a Fatima Visit?
November 26, 2022ISFCC 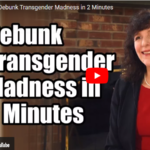 How to Debunk Transgender Madness in 2 Minutes
September 26, 2022ISFCC