“Roe vs. Wade is overturned, Pro-life Ireland it’s your turn!” This and other chants could be heard through the streets of Dublin on Saturday, July 2nd as thousands of enthusiastic pro-lifers took a stand for the unborn at the Rally for Life.

Volunteers of the Irish Society for Christian Civilisation (ISFCC) in distinctive red capes encouraged the rally participants by playing Irish tunes on the bagpipes and carrying a statue of Our Lady of Fatima in procession.

The atmosphere at the Rally for Life was one of jubilation. “Being here in the streets of Dublin, you really get the sense of something momentous happening now that Roe vs. Wade has been overturned,” commented Rory O’Hanlon with Irish Society for Christian Civilisation.

Donal, from Cork, described the overturning of Roe as “a huge boost.” “In Ireland we’ve been against the ropes. It’s been tough the last few years but this has given everyone a big boost of confidence,” he added. This and many other comments reflected the hopeful environment at the 2022 Rally for Life. The American pro-life victory gives hope to thousands of pro-lifers in Ireland that we too will one day witness a time when abortion will be unthinkable and women will never go through the traumatic and regrettable act of an abortion.

Five Lessons We Should Learn from the Overturning of Roe vs. Wade

Praying for an End to Abortion

Prior to the rally, Catholics, rosaries in hand, processed from St. Saviour’s Church to Parnell Square accompanied by Marian hymns played on bagpipes. One man asked if the volunteers would be praying the rosary. “Yes, we’ll be carrying the statue of Our Lady and praying the rosary throughout the rally,” a volunteer explained. “Good,” the man replied, “Keep those Hail Marys coming. We need more prayer.”

The many Catholics praying during the Rally for Life is a reminder that the fight for life is above all a religious fight. At the heart of the battle that brought an end to Roe were the numerous public prayer rallies and vigils held over the decades by dedicated American pro-lifers.

In a country with a nominally high percentage of Catholics, we can appeal to a higher law in the battle to end abortion. This law is God’s Natural Law. A clear reading of the fifth commandment “Thou Shalt Not Kill,” explicitly prohibits the unjustified killing of an innocent fellow human being. We have the moral high ground to condemn the actions of the pro-abortion movement over the abhorrent and abominable act of an abortion. We must proclaim our message with courage and conviction.

Volunteers with Irish Society for Christian Civilisation handed out 1,000 leaflets to passers-by titled “Roe v. Wade Is Dead What Now?” The leaflet highlights five major problems with the current abortion debate and five ways the right can fight back.

The leaflet explains how crucial it is for the pro-life movement to embrace all that is pure and moral. We must be united around the natural moral law which protects the family and the right to life. The left also sees the need to be united. However, leftists unite in promoting all that contradicts the moral law such as abortion, homosexuality, and transgenderism. The leaflet reiterates how the pro-life movement must also see this clash as multi-issue in order to be effective.

“Failure is Not an Option”

At the end of the rally, several pro-life speakers gave words of encouragement to the crowd. A particularly compelling speech was given by Bernie Smyth of Precious Life. She spoke to the crowd about the importance of total commitment to the pro-life cause. “We are in a bloody war and failure is not an option,” Smyth said. She reminded the crowd, “Our Christian faith requires us to take great risks. We are called to endure, to be steadfast, and to persevere.”

Encouraged by the end of Roe vs. Wade and with the help of God and Our Lady let us persevere to the end in the battle to end abortion and all the evils that threaten our country.

Previous PostFive Lessons We Should Learn from the Overturning of Roe v. WadeNext PostThe Origins of Devotion to Our Lady of Mount Carmel
0Shares 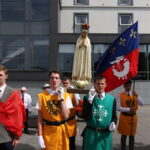 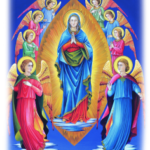